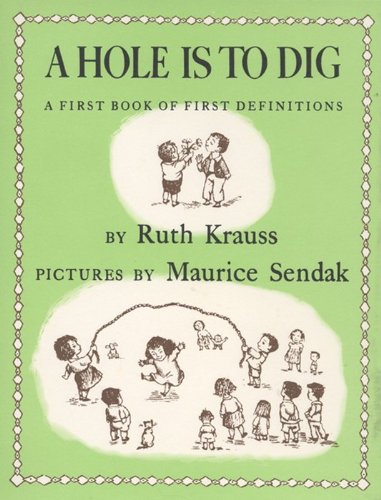 Children will take this book of words and pictures to their hearts. What would you say about eye-brows? Miss Krauss and the many children who made suggestions, re-visions, additions (and subtractions) to this book say, "Eyebrows are to go over eyes."

Children will take this book of words and pictures to their hearts.

What would you say about eye-brows? Miss Krauss and the many children who made suggestions, re-visions, additions (and subtractions) to this book say, “Eyebrows are to go over eyes.” A face? “A face is something to have on the front of your head.”

Also, “a face is so you can make faces.” Hands? Well, hands are to hold. And also “a hand is to hold up when you want your turn.” “A party is to say how-do-you-do and shake hands” and also “a party is to make little children happy.”

Of course, a brother is to help you, a package is to look inside, arms are to hug with, and a book is to look at.

Ruth Krauss (1901-1993) is the author of over thirty books for children, including the classics The Carrot Seed  and A Hole Is to Dig, illustrated by Maurice Sendak. “Ruth Krauss’s intuitive ability as a writer to capture the free-spirited thought processes and laughter of young children ensures her books’ widespread acceptance and timeless appeal.” So concludes her entry in children’s Books and Their Creators (1995).

Maurice Sendak has written and illustrated have nurtured children and adults alike and have challenged established ideas about what children’s literature is and should be. The New York Times has recognized that Sendak’s work “has brought a new dimension to the American children’s book and has helped to change how people visualize childhood.” Parenting recently described Sendak as “indisputably, the most revolutionary force in children’s books.”
Winner of the 1964 Caldecott Medal for Where the Wild Things Are, in 1970 Sendak became the first American illustrator to receive the international Hans Christian Andersen Award, given in recognition of his entire body of work. In 1983, he received the Laura Ingalls Wilder Award from the American Library Association, also given for his entire body of work. Maurice Sendak was born in Brooklyn in 1928. He now lives in Connecticut. Learn more about him here.

“A unique book . . . with drawings bouncing with action and good humor.” — –NYT

“I was looking for something to send to my 4-year-old grandson and discovered this wonderful book that his father, now 44, loved when he was little. It is a complete delight, both for kids and the adults that have to read it (and read it, and read it…) to them. I still happily remember some of the definitions, these many years later. The text was written by children and the Maurice Sendak illustrations are priceless. This is one for the ages — a real classic.”

“I bought this book after a glowing recommendation in Honey For a Child’s Heart. To say it did not disappoint is the understatement of the century. This book is so cute, as soon as I got it, I checked to see if there were any more used copies available for the price I got mine. Alas, none were available, so now I have to just be thankful for the one that I got at an awesome price rather than buying one for every child I know. Buy it. Buy it. Buy it.”

Look Inside
Disclosure of Material Connection: Some of the links in the page above are "affiliate links." This means if you click on the link and purchase the item, I will receive an affiliate commission. I am disclosing this in accordance with the Federal Trade Commission's 16 CFR, Part 255: "Guides Concerning the Use of Endorsements and Testimonials in Advertising."
Return to Book Finder
Go to Book Finder